Recently my husband asked me why I love Kate Spade so much, I said “I don’t know, Marketing?”

There’s just something about Kate Spade as a brand that just makes me giddy. I went to their store that just opened in Kenwood recently, and when one of the ladies working there asked if I needed help, I said “Nope, I’m just excited to be here.” She thankfully laughed off my crazy. I managed to answer No, just browsing” to anyone else that asked and had to force myself to leave because I spent a really long time there for someone who wasn’t going to buy anything. It was all just so pretty to look at. It didn’t help that I was telling my husband how much things cost, or what the idiom bracelets said inside without even picking them up.

Trying to figure out what to write for tonight, I settled on A few of my favorite things, and went about putting the wishboard together. Then I realized it was shaping up to be mostly Kate Spade, and just decided to make it A few of my favorite Kate Spade things. Some of these things you’ve seen before, and some I’ve never mentioned, but I adore them all.

Side note: My Husband should probably book mark this page.

I recently received the Rose Vox Box from Influenster and I decided to share with you guys what I got.

I’ll start with the bonus item first. Which is the Vitabath Asian Orchid and Coconut Hydrating Lotion

It smells amazing, but seems a bit out of place because the Coconut makes me think of summer. I do love it though.

Everything else on the other hand was really nice and absolutely spot on.

There was the Rimmel Scandal Eye Retro Glam Mascara which is very nice. It has a dry formula and gave me an effect similar to the YSl Shocking but not quite as big. Next in the box was these Dr. Scholls for her cozy cushions insoles which I plan on putting in either my Wine colored Old Navy shoes or in one of my pairs of Hunter Rainboots. These feel insanely soft and I can’t wait to use them. The last beauty product and my absolute favorite thing in the box were the Kiss Gradation polishes. They’re just so pretty, I got them in the color Film Noir but I noticed a gold version of these polishes in the little add in the box and I really want to pick that one up too. I love the Glitter, it’s just so stunning.

Then there was food included in the box: and finally a Lindt Lindor Milk Chocolate Truffle. These are some of my favorite chocolates and I’m so excited about this one. I think these vox boxes just keep getting better, and this has been my favorite one yet. Thank you so much Influenster for providing these items for me to try out. What item would you most like to see a review on?

Have you ever bought something and decided you hated it within the first 24hrs of owning it? I just did that with a bottle of nail polish.

I bought the OPI Liquid Sand in Get Your Number last night, came home and immediately put it on my nails…and took it right back off. Seriously I had already taken the polish off my left hand when I decided to stop and take a picture for you guys. Here it is: 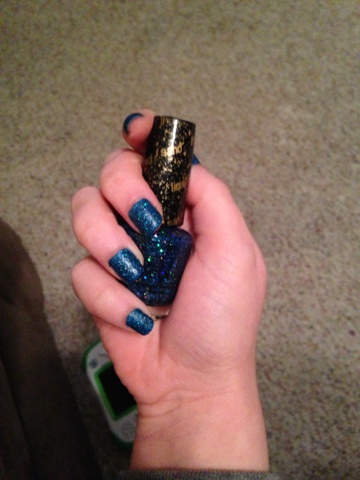 This is just an iPhone photo my husband snapped really quick for me.
There’s nothing against the polish concept. I loved putting Westminster Bridge matte top coat on top of Deborah Lippmann Raspberry Beret, but I just didn’t love this. Actually, I hated it. It looks so pretty in the bottle, and nothing like that at all on my nails. I wanted to love this since I just bought my aunt a set of the minis for her Birthday, I thought we could match. I just don’t think this works with my skin tone, at all.
My husbands opinion is that it looks cheap, and he definitely wasn’t a fan. He also said it should have been shinier because of the glitter. I kinda get that, it does look especially dull on my nails, and crazy shiny in the bottle.
I didn’t even take a shot of this for my Pinterest board, I just immediately gave it to my cousin who’s staying the week with me. Then I put my Nails Inc Cheyne Walk back on, which I’ll be doing a review of soon.
Some trends work, others don’t. This one, much like the shatter polish trend, just didn’t work out for me. Unlike the Shatter trend, I don’t think I’m gonna try so hard, I’ll just console myself with another Nails Inc polish, because what I’ve tried so far is amazing, and they’re only $1 more than OPI. So worth it.
3 Comments

Okay I’m a tiny bit obsessed with Nail Polish, I mean I only have 131 bottles, but something in my brain says that I need more. Lots more.

It probably doesn’t help that one of my favorite blogs Nails In Nippon blogs about nail polish and she swatches the most beautiful colors. But usually it’s something I own, or I own something similar and I don’t really decide that OMG I kinda need that right now. Until her post on Rainbow Honey. Somehow I didn’t know indie nail polish was a thing, and why I didn’t I’ll just attribute to me living under a rock, or something like that.

But I digress, it is a thing, and it is amazing. After reading the blog post, which is about polishes that aren’t yet for sale, specifically from the Sweet Talk collection, I wandered over to the Rainbow Honey website to see what she had for sale currently and that’s when I discovered the Equestria Collection, and kinda died a bit. Then I sat down with my son and guessed by the names of the polishes which ponies they went with.

I promise I’ll do a review as soon as I pick the colors up!

Side note: I was wearing Lancôme’s Noir Caviar with Orly’s Shine on Crazy Diamond until recently and later tonight I’ll be painting them with Deborah Lippmann’s Putty in your hands and OPI’s I Lily Love You, because I saw the dress Lea Michelle wore to the PCA’s and I think if I use that combo it’ll look like her dress-ish

It’s Blogmas Day 19 and I’m still sick! Which is terrible because according to Norad, Santa leaves the North Pole in 4 Days. For those of you doing the math on that one if you’ll remember the international date line and that China is a full day ahead of us then the math is correct. Anyways I’ve been spending a lot of time curled up with Cocoa, watching Christmas movies, and whining about how awful I feel. 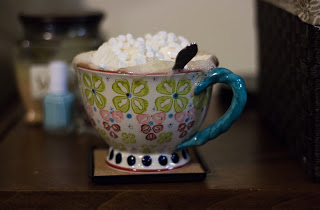 Isn’t my cocoa so pretty? I topped it with Cool Whip and a ton of mini marshmellows. I thought it was so pretty sitting there that I had to take a picture. 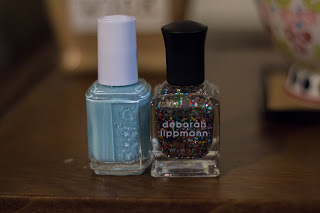 Normally I’m not a big fan of pastel’s for winter, but I’ve had some variation of Red and glitter or dark grey on my nails since Thanksgiving. Since I wanted to shake things up a bit I went for Mint and Glitter, and as you can see there is Red Glitter in that bottle. I know I was trying to branch out, but it is the Christmas Season.  I used 2 coats of Essie’s Mint Candy Apple and then I did a crescent moon of the glitter and then used what was left on the brush to dot glitter all over the nail. I plan to do my nails this way for my family’s Christmas Party but most likely with An Affair in Red Square by OPI instead of mint.

I had hoped to get Lancome’s Flirty Red to wear for Christmas, but when I went to get it they were sold out or something because I didn’t get it. I do love an Affair in Red Square though and I bought it last year with Sephora by OPI’s Only Gold For Me when Red nails with Gold Glitter tips was the thing that everyone loved.

I haven’t done that combo yet this year and I might but I quite like doing the crescent of glitter instead of the tips. I’ll paint my nails that tonight and if I can get a good picture I’ll add into tomorrow’s post.

Tomorrow’s post may actually be on all my favorite winter polish’s since I haven’t done one yet, and I do have a lot of polishes.