Today’s review is on Gone Girl by Gillian Flynn. 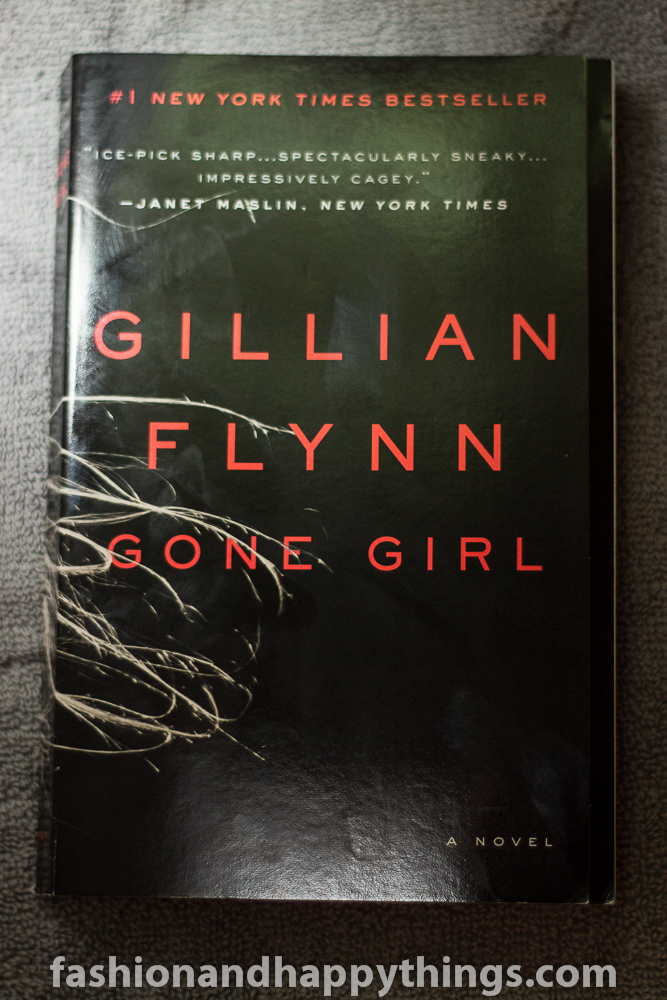 Which to be honest is kinda a saved the best for last. I can totally see why they’re making Gone Girl into a movie. Sharp Objects may have been my favorite, but Gone Girl is so good too.

It’s Amy and Nicks 5th wedding anniversary when Amy goes missing. Things look bad for Nick as evidence adds up and things get found out. Can Nick find out what happened before he ends up in jail?

This book was so good. It’s definitely a thriller and is going to make an amazing movie. I can’t wait to see it. I definitely wasn’t expecting the second half of this book at all. What happened to Amy is so just messed up. I really recommend this book and I definitely recommend that you read the book before you go see the movie. I’m purposefully keeping this review short so I don’t accidentally reveal anything that happens.

I said in my last review I was going to review all of the Gillian Flynn books currently released. This week I’m doing Sharp Objects. After being released from a psych hospital Camille Preaker is sent by the paper she works for to her home town to cover the murder of two preteen girls. While uncovering the story from the reluctant to talk town, she finds herself identifying a bit too much with the victims. Camille has to face what happened to her all those years before, in order to cope with this homecoming.

Camille’s scars speak volumes about who she is and what happened to her as a child. I absolutely loved the dark twisted nature of this book. It’s definitely the shortest of Gillian Flynn’s current novels but it’s also my favorite. I didn’t know this was her debut novel until I read the back of the book after I read it, and it’s definitely a strong debut. The ending of this book definitely bothered me a little bit, it wasn’t what I had expected at all. The ending is what makes this one of my favorite books though.  I definitely recommend it, but it’s the kind of story you shouldn’t read alone at night if your easily scared.

It’s been a little while since I’ve done a book review, and since I finally have all 3 of Gillian Flynn’s books I thought I’d review them for the next couple of weeks.

First up is Dark Places: Synopsis: When Libby Day was only seven years old her Mother and sisters were murdered in what was dubbed “Satan’s Sacrifice” Of Kinnakee Kansas. She lived and testified that her brother Ben was the killer. Twenty-Five years later, the Kill Club hopes to find out the truth of what happened that day, and Libby hopes to turn a profit off of their search. As Libby and the Kill Club search for the truth, Libby finds herself on the run from a killer.

This was the first Gillian Flynn novel that I read, and it’s probably my favorite one. I have it in both Paperback and on my nook. This book was one of the first books I bought that was recommended by ChapterStackss on youtube, and it definitely kicked off my trust for her recommendations.

I completely recommend this book, it dark and complex. Libby’s life is completely destroyed because of what happened to her as a child, and looking into her past not only explains her life as it is now, but helps her get things together to change it. The ending of this book isn’t something you’d expect. I stayed up all night finishing this book because I just had to know how it ended, and I’ve read it a few times since I first bought it.

I know in the summer most people are looking for lighter beach reads, and this book definitely isn’t one of those. But where I live June Gloom has hit hard and it’s been cool and rainy for a few weeks now. Which sets the perfect tone to cozy up with a dark and creepy book. I almost hate to say it because I know Fall frenzy overtakes the blogging world every August, but I’m already getting excited for Fall this year.

Do you read book genre’s by season? Or do you just go with whatever looks good? I’ve been using this for a while now. I can’t remember exactly when I bought it, but it wasn’t too long ago. However I am already dreading the day that I run out of it, because I absolutely adore it. I think that this is either better than or at least equal too Chanel’s Vita Lumiere Aqua. I haven’t used the Vita Lumiere Aqua in a long time, so I’m not positive if it beats it, but it is a possibility.

I love what this foundation does to my skin. It makes it glow and the coverage is lovely. It’s definitely light and perfect for spring and summer. It hasn’t broken me out or caused me any skin irritation. It’s just been absolutely lovely.

If you’re in the market for a tinted moisturizer for this spring, and you like a radiant glow, then I fully recommend this foundation.