I never really get a great start off to the year, because I’m always really sick until midspring when it starts to warm up. So for a little while longer it’s going to be just stylish sunday’s posts until flu season is over.

I think I took these last wednesday, I wasn’t to sick, but I was still feeling really lazy.

Even Howl was feeling the laziness of the day: He is a floof and he needs to be groomed, which we will be getting done next week. Since I was feeling really sick I just tossed my hair up into a bun, but I wanted to feel cute so I added a frenchbraid in the back:

I bought the Conair You Waving Wand the first time I got my hair cut because I wanted something really easy to use, but different from the Conair You Curl Infinity Wand which I’ve had since it came out.

I remembered that Fleur De Force talked about a curling wand like this in one of her videos, except hers was the Babyliss one, so I decided to try it out. The first thing I did when I got it was throw away that 3 fingered glove thing because even though I haven’t ever burned my fingers with the Infinity Wand, I did manage to burn myself with this wand using that glove. Since I got rid of it though I haven’t had a problem.

The main reason I purchased the Conair version instead of the one from Remington is because of the heat settings. I had a bad experience with someone curling my hair that caused me to have to get my hair cut in the first place.  I only use this set to the 330 or 310 degree temperature, but I can say that it does heat up quickly.

These are the kinds of curls that I get from this curling wand. I usually use 1 inch or larger sections rapped around for a count of 10. But if you used smaller sections then you’d get tighter waves from it.

I absolutely love this curling wand and use it about once a week, and the curls last for about 3 days until I need to wash my hair.  I fully recommend it.

So as you may or may not have noticed, I recently got my hair cut. I mean it’s only 6 inches shorter, but if you haven’t noticed, it’s whatever. My salon is an Aveda Salon, and I’m always obsessed with the products my stylist Christie uses on my hair, and I was out of shampoo so I decided to buy it.

I bought the Be Curly Shampoo and Conditioner and the Brilliant Retexturizing Gel.  I’m pretty in love with these products and the way they make my hair feel and smell.

Then if you haven’t heard the story. A little while ago I lost my favorite hair brush. The one I use for actually brushing my hair. I searched all over my house and then finally gave up and ordered a Tangle Teezer because I had been wanting one for a while.

A few days after it arrived my favorite hair brush turned up in such a really strange place that I can only assume it means that I am the Stepford Clone. I decided to keep the Tangle Teezer though because it’s cute.

And finally I bought the Conair You Waving Wand. I really like Conair Hot Tools because they’re good quality and inexpensive and I’ve used them all my life. This does give really cute curls/waves but it still isn’t what I was looking for.

My favorite thing about the conair hot tools is they have heat settings. Which having both burned my hair and had it burned by someone else before I can tell you how important different temperatures are.

That’s everything I bought for my hair recently. I’m pretty happy with all of it. What is your favorite brand of hot tools to use? Let me know in the comments below.

Remember last week when I said I had a uniform of sorts that I felt extremely happy and comfortable in? I’m kinda repeating it today. And I want to repeat it over and over, I just adore it. I’m wearing a Madewell Boyfriend Shirt, Gap Mesh Sleeve Sweater, Victoria’s Secret Most Love Yoga Leggings, and Pink and Pepper Riding boots. My Earrings are Kate Spade and my Necklace is from H&M. This is my favorite photo of the entire set.

The Lancome Polishes are some of my absolute favorite polishes. I have 3 of them and can promise that you should be looking forward to a review coming soon. Normally I’d be upset when my shoes started to get scuffed but I’m actually loving the way these are aging.

I hadn’t realized how long this shirt was before, so I’m actually really happy with it. I know it looks a bit short in this pictures but that’s just the way I’m twisted.

It’s starting to get really cold outside, so I’ll be taking most of my outfit photos inside now. Hope you like this door and it’s little glad air freshener that somehow got randomly hung there. Seriously I don’t even know how that happened. I’ll probably do photos in front of the tree after I put it up.

Or Accept No Substitutes 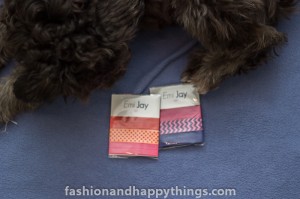 I know I’ve mentioned Emi-Jay hair ties a lot. I kinda can’t help it, I’m absolutely obsessed with them. I’ve tried the ones from Sephora, Twistbands and even ones that my dollar store was selling that looked similar.

None of them have come close. None. I don’t know why these are better, they just are. I’m certain the other companies making them use similar, if not the exact same materials, but Emi-Jay just seems to do it better. They’re about the same price as Twistbands and the Sephora ones too.

Of course it could be the Hippie in me, that’s mostly hidden by all my consumerism. Because Emi-Jay give money to Operations Smile, Be The Match, Step Up Women’s Network, and Project Knapsack. Any one of these charities would have been an admirable choice, but these girls chose to donate 20% of their procedes to split between them all.

Oh yeah, I said girls. Emi-Jay was started by two 8th graders in the Jay part of Emi-Jay, Julianne’s Kitchen. The Emi part of course stands for Emily. They got tired of no damage hair ties that still damaged their hair, and decided there was a better solution, so they found it. And they managed to make a successful business out of it, one that has Jennifer Aniston, Sarah Jessica Parker, Katie Holmes and Kim Kardashian as loyal clientele.

Another thing that I adore is the variety that they come in, printed, beaded and now bows. Bonus they totally have headbands. I haven’t tried them yet, but I am absolutely desperate to. I adore that they’re made with the same size band as the hair ties. Twistband uses a thinner band for their headbands, I have some that I got from Birchbox and I hate them. The thinner twistband actually causes dents. 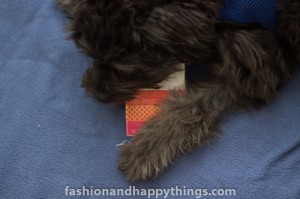 Everytime I get my hair done, my hairdresser always comments on the fact that I don’t have split ends or breakage, despite the fact that I constantly am throwing my hair up in a messy bun. I don’t use heat on my hair often so that will cover the split ends, but I completely attribute the lack of breakage to the fact that I only use Emi-Jay hair ties.