A while ago, I was shopping in Sephora and I had my son with me. I must have swatched a million products and said I was in love with everything. But there was one product I really wanted and couldn’t justify. My son, who was only 7 years old at the time, pulled aside an employee and asked her to write down the name. He got me the Hourglass Ambient Lighting blush in Luminous Flush. I’m obsessed with the one he picked out. It has more of the pink color than the highlighter in it, which is perfect since I want to use it as a daily blush.

I may have mentioned that I always make a list for my husband. It’s a very detailed list with color, sizes links and any coupon codes. At the top of my list this year was workout gear. But he got me Keds instead. Specifically the Coral Gingham Keds that I once saw Taylor Swift wearing and randomly said that I really loved those shoes. And I’m so in love with them. Even more so that he paid attention to me and remembered that I really wanted those particular ones. Since my ankle is messed up I can’t wear them yet, but I can’t wait until I can! I plan on doing a wishboard on how I plan on styling them very soon. I know I mentioned I would post a what I wore for mother’s day. However the photos didn’t turn out. We got some good ones of me and my son (which I’m not posting for his privacy) and a really great one of Howl. 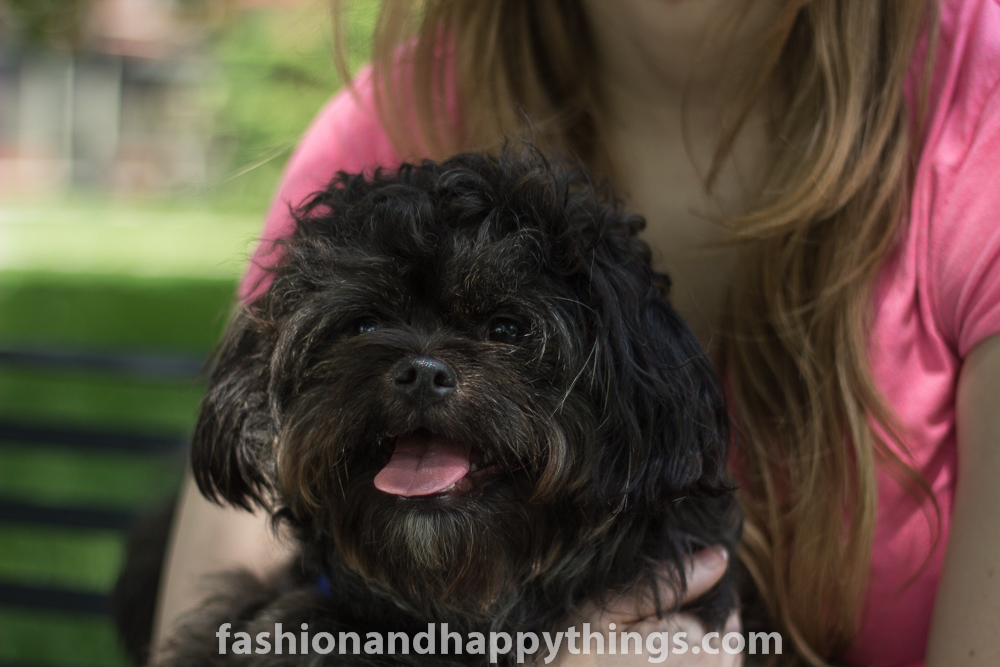 There will be a what I wore on Mother’s Day post up later this week, and a what I got for Mother’s Day, as soon as my husband edits the photos. However since he’s currently doing literately everything while still working 9 to 5, it doesn’t leave much time for him to do else.

So this is a non post, to say there will be some posts coming soon, and a of course it’s accompanied by this adorable picture of Howl. This was taken when we took the photos for Take A Hike. He’s wearing a Worthy Dog Harness in Royal Blue, with a Top Paw Comfort Leash also in Royal Blue. He’s also looking shaggy so he’ll need a trip to the groomers soon. Probably beginning of next month will be his limit.

If you have any post ideas for me to do while I’m healing, and can’t be on my foot, leave them in the comments below.

In my Mother’s Day Gift Guide I said I’d be perfectly happy if I received a Gift Card to the Gap, and then I did a post showing what I’d most likely buy if I did. Well I didn’t receive the card, and sort of new I wouldn’t, since I already had gotten my gift way back in April.
Well I was bored the other day, and when I’m bored I window shop online, and I found somethings that I really loved in the sale, and came across some deals that I just couldn’t pass up. 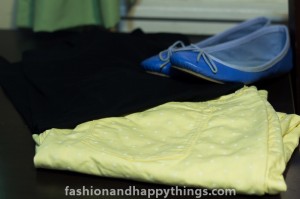 That black tee that I said I’d get if I got a gift card, full price $20 on sale for $15. Then there were these yellow polka dotted skimmers that I fell completely in love with, full price $70 marked down to $20 and only left in my size. Finally, the blue leather flats I featured in my I’d rather be in Paris or Parisian Chic post, full price $40 on sale for $20 once again only in my size. If you grab your calculator you’ll see that full price it would come to $130, before tax. But I wanted to see what they’d come to with the sale prices, so I put them all in the cart and they came to $56 including tax, but wait there was a coupon code at the top of the site for 35% off, which made my total $36 and free shipping. I mean really? How could I not. That’s one third of the price.

I, of course am a very happy camper, and will definitely be checking the Gap sales more often.

*Edited to add: I just discovered this is my 200th post! And it’s about shopping…I seriously have a problem.

If this lateness keeps up, I’m going to have to change the name to Stylish Mondays.

This one is late though because I wanted to do a post of what I wore today, and since it was Mother’s Day and I am a Mom, I just managed to squeeze them in after dinner out and before the ice cream cake at home. Yep I’m spoiled.

This is kinda picture heavy. I’d apologize, but really I felt amazing in this outfit and we got so many good pictures I was having a hard time narrowing it down.

I wore the Black and White Olsenboye Skater Dress that I bought at JCP a few months ago. They seem to be rebranding themselves again, so I don’t know if I’ll be shopping there anymore, but I really love this dress. A Pink Wallace Cardigan from Madewell that I got on sale for $15 last Feburary, my Kate Spade Bow Belt that I bought just before Christmas which was also on sale for $50 instead of the normal $70 something, and Black HUE tights. Not Pictured are my Sam Edelman Calypso Flats in Black with a Black patent toe cap and gold studs.

I know it’s kinda amazing right? The only thing I wish I could have changed is I probably would have worn a pair of Chelsea Boots with them. It was cold today, plus I feel like they would have looked better with the tights. I blame Voussontbeauetbelle for that obsession right now.

For my face I just wore my everyday makeup but I applied it a bit differently using brushes for my concealer and foundation. I really want to get some Real Techniques Brushes for my foundation and concealer, but this time I used a random stippling brush and fluffy eyeshadow brush I had.

My hair was a slight variation on Zoella’s Messy Top Knot Tutorial. The only variation is that I pinned my bangs back. Even though I used Zoella’s Tutorial, it really reminds me of LeighannSay’s Pretty Dirty Princess Bun, which I adored, but could never get my hair to do. I’m in the process of looking for a new hair stylist and I haven’t gotten my bangs cut for quit a while. They’re kinda driving me crazy.

I bet you’re wondering if I got anything for a Mother’s Day Gift. Of course I did. You’ve already seen my gift though, a few times.

Bet you’re wondering what that is? Well I actually got my Mother’s Day Present a month ago and it was….
Howl.

Yep, I had been wanting a dog for a very long time and since he and all his things were pretty expensive, we decided that he would be perfect as a present for my Mother’s Day.  Of course I’m completely in love with him.

He’s teething right now as you could guess by the fact that he’s 3 months old, and he’s chewing his lead in the above picture. He’s also pretty attached to sticks.

See, he loves sticks. We’re bell training him, and sometimes he’ll go out, find a stick he loves and for whatever reason drop it on his way in. He’s been known to go back and ring the bell, just so he can go out to get his stick he dropped.

Oh, look at that bokeh! I’m kinda completely in love with this picture of a random blossom off the tree I was standing next to. It’s so springy.

Mother’s Day is creeping up on us fast and I’m sure you’re all wondering what to get the women in your life who have Mothered you or your children.

There are two camps when it comes to Mother’s Day gift giving. The first camp is all DIY, homemade is best. The second firmly believes that Mother’s Day is about being spoiled, and giving your mom or the mother of your children a little bit of luxury. I believe that depends on the person you’re giving a gift.

Personally I’ve got a foot in both camp. I’ve gotten some lovely homemade cards, but I also have a major weak spot for luxury items. I really think it depends on what it is, the effort behind it, and the presentation.

However if you do have the expendable cash, below are some ideas.

Finally I leave you with this advice, think about your mother before you buy her gift. Personally, I’d be happy with some Chelsea Boots and a gift card to the Gap, and my own mother would prefer either some books or a gift card to Barnes and Noble. These gift ideas are just suggestions.