This post is late because I’ve been sick. But the weather here has kinda been unseasonably warm lately. So I decided that if it was warm enough for skirts and tights, that meant there was no reason for my favorite skirt to be hanging out in my closet.

I love love love this skirt, it’s navy with little red polka dots and you can’t see it that well here, because it was dark outside by the time I was able to get my photos taken. Please excuse the doe in the headlights look, sometimes I really have trouble posing for photos. So you get wide eyed and frozen. 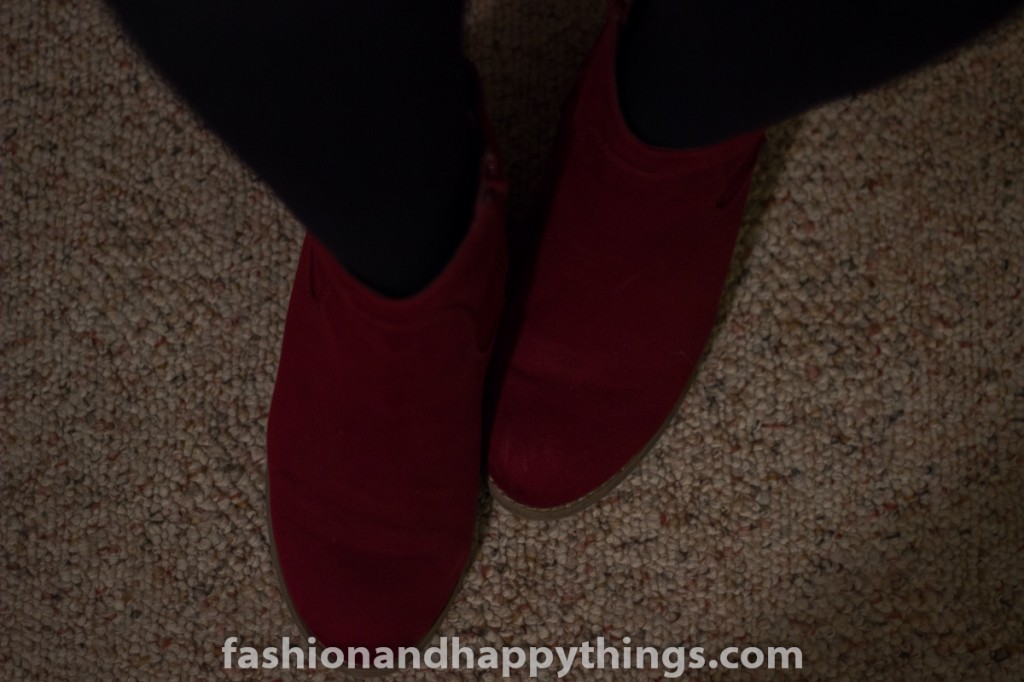 I have worn these boots to death this year and they’re absolutely scuffed, and definitely showing their wear, but I still can’t stop wearing them and I really hope that I can find a pretty similar pair in black, grey or brown very soon because these have been my absolute favorite shoes.

What has the weather been like where you are lately?

The beauty of Las Vegas is that there is something for everyone, and The Cosmopolitan Of Las Vegas has something for everyone. So even though I left my partying behind in my early twenties, there’s still plenty of amazing things to be done there. They have everything from a Casino, to shopping, to Lounges, P3 Studio, a couple pools and quite a few options for dining.

For the #MyCosmoStyle challenge I’ve decided to show you some fictional outfits that I would wear if I were staying at the Cosmopolitan of Las Vegas. Were I going to Vegas I know I’d definitely want to visit the P3 Studio, where you have the choice to be a fly on the wall at an artist’s studio, or you can get in on the fun yourself. But first I’d definitely need to have some brunch at The Wicked Spoon Buffet, because how awesome is that name? To dress appropriately for both activities I’d go for something like this.

The cranberry colored top from Topshop and skinny jeans from H&M are definitely on trend for autumn, but the lace on the top makes it interesting. I’d pair it with a quilted bag, simple arrow earrings, and ankle boots all from asos and a leaf ring from express . I’d top the whole outfit off with a floppy wool hat, because every since I cut my hair I feel like that style would really suit me. I absolutely love this outfit, it’s simple and interesting at the same time. And the real bonus is none of the pieces are constricting in anyway. I could easily see myself running all over Las Vegas in those ankle booties.

However, come night time I’m much more interested in looking good, rather than being completely comfortable. I know I’d definitely be heading out to dinner to somewhere like STK with it’s modern, trendy vibe. A restaurant that is already popular in New York, Maimi and LA definitely has to top my to try list. From there I’d be heading straight to Marquee where I would be searching for The Library. Because Books, Billiards, and a Bar?  That’s exactly my kind of place.

I’d go for a leather look mini dress from Topshop and keep my hat and earrings from earlier, Mostly because by now I have hat hair. I’d switch the ring out for this simple chunky chain from Topshop and the quilted bag for this thin envelope bag from Asos. The smaller bag is super important, I don’t want a clutch that I might put down and loose, but I don’t want a bulky cross-body that will keep bumping into people. This bag has all the tininess of a clutch and the convenience of a cross-body. I’d finish the outfit with these cranberry colored Ankle Booties from Topshop that have chunky heels. This is the most important part of this outfit. First they’re gorgeous, secondly since they have chunky heels and are a bootie, not only will they be more comfortable, but they also will be much easier to dance and walk in.

I’m so obsessed with both of these outfits. What would you wear for a day or night out in Las Vegas?

So I’ve finally decided what day I’m going to post my outfit posts and how I’m going to title them. In case you didn’t notice. Also I loved Bullwinkle as a child. But Mr. Peabody and Sherman was my favorite. 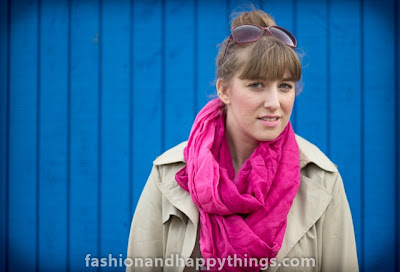 Just a warning, it was an absolute miserable day when these photos were shot. It was cold cold cold, and I was super de duper unhappy about it. 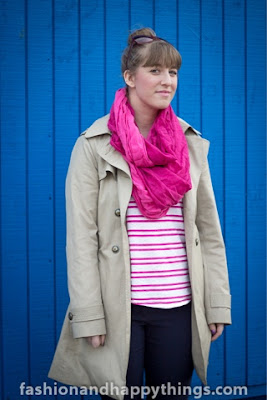 I’m wearing a Trench Coat from Express and my absolute favorite scarf from H&M. I actually got the Coat in a sale, for about a 4th of its original price. My favorite bit is that the sleeves are lined with a coral/hot pink color that looks really cute when you turn them up, which I usually do. The scarf is an infinity scarf in dark raspberry pink and a lighter kind of strawberry smoothie type pink. It’s super soft, and very snuggly without being to bulky. I have my absolute favorite Sunglasses from H&M on my head, they have burgundy frames. 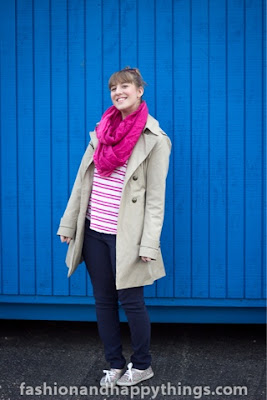 My top is from Madewell and my trousers are H&M. I love this top, its a baseball style tee with Hot Pink stripes and Navy blue sleeves. another one that I got an amazing deal on. They had a really great sale last year and I actually bought quite a bit. The pants are my absolute favorite. I love them so much that I have them in both blue and black. I would have bought them in all the colors but I thought that was to many. I really regret not buying them in the blush color. 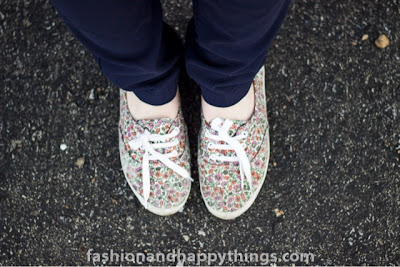 These shoes are from H&M a few years ago. They reminded me of shoes my mom would have worn in the late 70’s. I’m absolutely impatient for spring and flowers everywhere, so I decided to put the flowers on my feet. These were super cheap at only $7 and are great for just kind of kicking about if I’m not doing anything special.
I kinda really loved this outfit, even though I froze my ass off. I’ll definitely be repeating this or some variation of it, when it gets warmer.
For details about my makeup, see my Nars Deep Throat Review.
Leave a comment

I’ve neglected this blog again, distracted by books, and sevenly (I check obsessively to see if they’ve met their goal), my youtube channel, and television.

I’ve changed things in my life, we bought furniture, and made our house feel like home.  I’ve come to realize I’m lucky to live where I do, it’s a very pretty town except the main drag feels a little off kilter with the rest of the town.  I live on a very quiet and pretty street in a deceptively sweet little house.  It’s the little part that’s deceptive, as we have a finished basement it’s not really all that little.

I’m lucky to live in a rainy area, I think I’ve talked about that before, how much I adore the rain, and all the things that come with it.  Except the natural disasters that come with rain, tornadoes and floods.  Other than that I adore the rain. Especially the smell.  I can’t describe it, but it’s something that no artificial scent has ever captured, but it’s my favorite smell ever.

Speaking of rain, I finally bought my hunter rain boots, I adore them and since I’ve added Dr. Schols Women’s Work insoles they’re probably my most comfortable shoes.  I also bought a Trench coat from Express originally $138 and on sale for $49, once you add in shipping and tax even at $60 it’s still a really great deal.

Moving on though I’ve become addicted to Anthropologie’s Tea Cups, they have some amazing dresses as well, but unless I catch one on major sale you won’t be finding one in my closet. Their tea cups are reasonable though as a treat anyways when I make it out to the mall closest to me that has one. They’re large sturdy mugs but they look like the delicate cups our grandmothers or great grandmothers depending on your age would have used.

I’ve just finished reading the Marbury Lens, literally just, as in roughly an hour ago. It’s dark and twisted, and the way it makes you feel while reading it sticks with you when you finish. It left me feeling the same way the movie Grave of the Fireflies did, a little empty and lost, like where we are now is just an illusion, but that feeling has since settled, hence my rhetoric about the sweet little house on pretty little street where I live. It’s good though, I finished the book in less than two days, and am sort of anxious to read it again to see if I accidentally passed things over that will change the entire books for me.

Sevenly isn’t exactly anything new to the internet but it has been getting more press from youtubers lately, and I’ve become obsessed, I’ve only purchased two shirts from them (am waiting on the second to arrive) but I do always make sure to tweet and share on FB their campaign for that week.  I love what they do because a lot of people wouldn’t think twice about dropping $22 on a tee at the mall, and $7 of every shirt or hoodie goes to a really good cause.  They also make it easy for you to continue to follow the causes you care about. Since I’m sort of a modern hippie, as much as I’m a consumerist this really works well for me and I wish I could buy all the shirts.  Since I can’t I encourage you to check them out weekly and if you find a cause that hits home with you, buy the shirt.  You get an awesome shirt and you may save a life or at least make it a little easier for someone else.

My youtube channel is a work in progress, I’m slowly figuring out what I want out of my channel and what I’m comfortable doing.  Most of that has to do with fashion, so I’ll be focusing mostly on that, but you’ll see all that there so I can move on.

I just wanted to sort of give you a quick fill in on what’s been going on since I last posted and now I’m going to settle in and enjoy the rest of this storm. 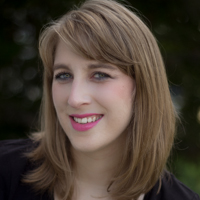